Posted at 10:20h in Uncategorized by cancergeek 0 Comments
0 Likes

As I promised the other day, I wanted to take a moment and to talk about a study that was conducted by the National Surgical Adjuvant Breast and Bowel Project (NSABP) in support from the National Cancer Institute (NCI). This trial is the first of its type to ever compare the effectiveness of two seperate drugs. The drug more commonly known as Tamoxifen (Novaldex) is already known and proven to reduce the risk of breast cancer in those women that have a higher risk for developing breast cancer. This trial compared Tamoxifen with a new drug called Raloxifene (Evista) and compared them head to head to see if the new drug, Raloxifene, was just as good, or maybe even better then Tamoxifen. The name of the study was the STAR Trial. STAR simply stands for Study of Tamoxifen and Raloxifene Trial.

So the STAR Trial began enrolling women in the study in 1999. The cirteria for being on the study was that participants had to be:
Women
In good health
Age 35 or older
Post menopausal and at a high risk for breast cancer based on the GAIL model.
The study began as I said in July of 1999 and was done accepting participants to the study as of November 2004. There were a total of 184,461 women that went through the risk assessment for the trial. Of that, 96,368 were eligible for the trial because of their increased risk for developing breast cancer. Of that, there were a total of 19,737 women who choose to enroll on the study. Of the patients on the study, 93.4% were causasion, 2.5% African American, 2.0% Hispanic/Latino, and another 2.1% other minorities.

A couple more things that we should all be aware of as well. According to the GAIL Model, a score of 1.66 is enough to significantly increase your risk for developing Breast Cancer with in the next 5 years. The majority of patients on the STAR Trial fell into much higher scores from the GAIL Model. About 30% of women had a GAIL score of 2-2.9, another almost 31.5% of patients on the trial had a score of 3-3.9. There was also almost 27% of women on the trial had an increased risk of 5 or higher according to the GAIL Model.
If you want to see more specifics about the people on the study and their age groups, pre existing conditions, and other aspects of the diversity of participants, you can find that information here: STAR Enrollment Stats.
Women were enrolled in one of 2 arms of the study. The first arm was: 20mg of Tamoxifen and a placebo. The other arm was: 60mg of Raloxifene and a placebo. Patients in both arms of the study had to take the medication daily, for a total of 5 years. There were over 500 sites in the US, Canada, and Puerto Rico that took part in this large comparison trial.
Star Results:
The initial results from this STAR trial comparing the use of Tamoxifen to Raloxifene in post menopausal women 35 years and older with a increased risk for breast cancer showed that both drugs reduce the risk for Breast Cancer by about 50%. 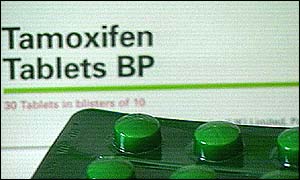 Since 1998, only Tamoxifen was available to patients as the only option to help prevent invasive Breast Cancer in women. With this study, women now have another option in Raloxifene to help reduce the development of Invasive Breast Cancer. This is very important due to the fact that Tamoxifen has rare, but very significant side effects.

In women who took Raloxifene those rare side effects were drastically reduced. The women in the arm that took Raloxifene for 5 years had fewer incidences of Uterine Cancers (36%), Blood Clots(29%), and Cataracts. The STAR Trial also conveyed that menopausal side effects such as hot flashes were mild to moderate and that the quality of life was the same for both drugs. Tamoxifen and Raloxifene are both known to help with Osteoporosis in women too.
One more important finding from this STAR Trial is that Raloxifene did NOT show an impact on the development of Lobular Carcinoma In Situ or Ductal Carcinoma In Situ. By contrast, Tamoxifen has shown clinically to reduce the risk of both of these precancerous or noninvasive breast cancers by one-half. (For more study facts click here: STAR)
This does NOT mean that if you take Tamoxifen or Raloxifene that you can forego yearly physical exams, screening mammograms, or self breast exams. These tools are still the best chances for early detection and better outcomes for women that develop Invasive Breast Cancer. What it does do, is for those women that are found to be at a potentially higher risk for developing an Invasive Breast Cancer, they now have another tool to help them fight this disease.
As always, if you or a loved one have any other questions, comments, or concerns; if you would like more information in regards to another cancer related topic, please contact me at: CANCERGEEK@GMAIL.COM or CANCERGEEK@CANCERGEEK.COM
~CancerGeek