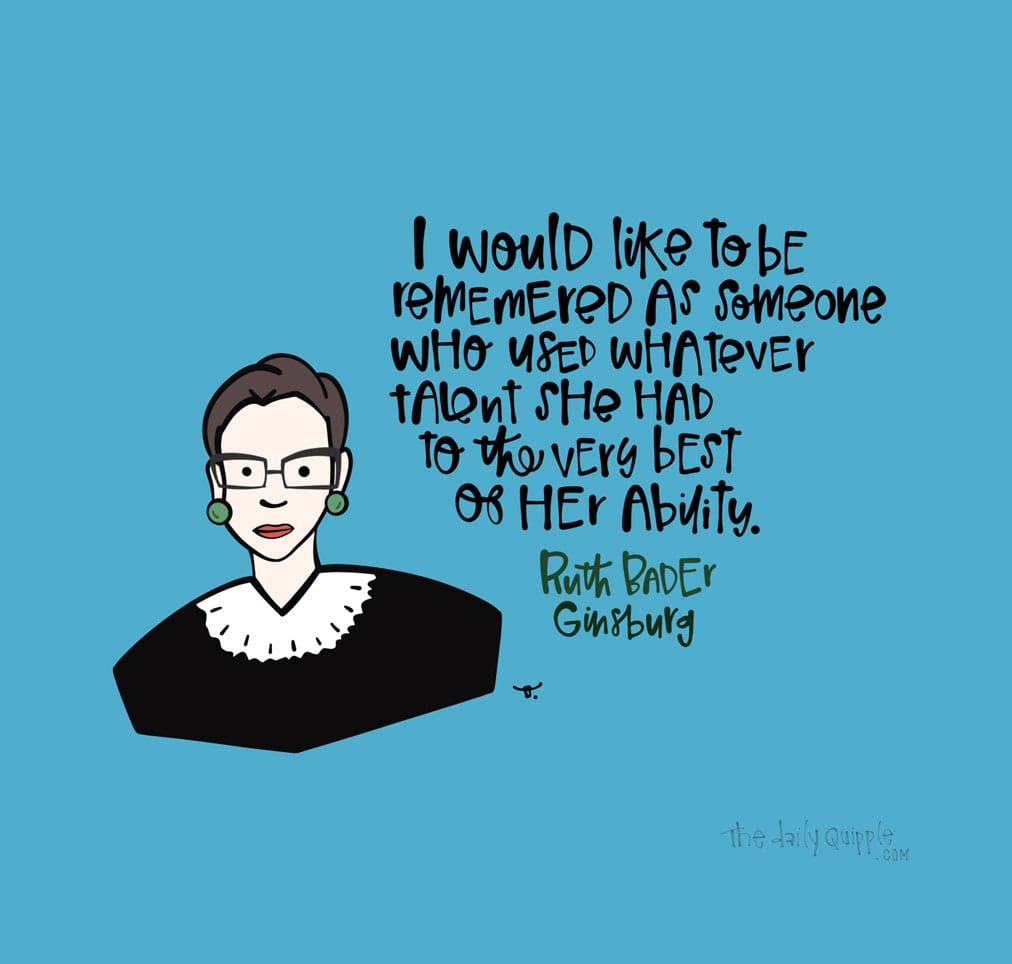 Posted at 17:46h in Uncategorized by cancergeek 0 Comments
0 Likes

I believe many of us are aware of the loss we experienced this weekend. I am not an expert on law, the supreme court, politics, or even feminism.

There are plenty of news articles, videos, interviews, books, and movies that you can find to learn more about the life, the trials, the challenges, and the context of Justice Ruth Bader Ginsburg.

For me personally, I have my own personal reasons why I think she was an amazing individual.

Justice Ruth Bader Ginsburg was short. She was 5’1″ and when she first began studying and then practicing law, it was truly a time in which a woman was a minority in most fields, especially law. Men, those in power, those in a position to decide the fate of who is in and who is out predominately looked the same.

Justice Ruth Bader Ginsburg was small in stature. She was quiet. She was soft-spoken. I am sure that many of her classmates, peers, and colleagues would see her and make a first impression. They may think why is she here, who is she, I wonder who she is married to in this room, or other similar thoughts.

She observed. She listened. She used history to change the world. To be more specific, she used his-story to find an opportunity in the law to demonstrate how something was unfair, limiting, biased, or discriminatory due to the inequality based on gender. She began by working on cases that were unfair to men and used that to begin her life’s work. As she would say later in her life, she did not fight for “women’s rights” but for “the constitutional principle of the equal citizenship stature of men and women.” (-RBG)

Yet even the mightiest of the mighty need a chance. They need someone to take a professional pause, to listen, to understand, and to not merely see the person standing before you in the present but the potential of what that person can do and become when given the chance.

In 1960 Justine Felix Frankfurter rejected Ginsburg for a clerkship based on her gender.  Gerald Gunther (Columbia law professor) gave a recommendation to Judge Edmund L Palmieri of New York’s Southern U.S. District Court. A recommendation that he couldn’t refuse. Gerald gave the ultimatum that you either hire Ruth or Gerald was not going to ever recommend another Columbia student to Judge Palmieri.

Most clerkships only last a year. (Justice) Ruth Bader Ginsburg held the position for 2 years.

It is with each opportunity that Justice Ruth Bader Ginsburg took that small door opening and proceeded to kick it wide open.

For me personally, it demonstrates the impact and legacy that a single person can have in this world.

When an individual understands their “why”, their reason for being, and has the ability to focus their passion and life’s work on a singular priority, that individual has an opportunity to make a ripple that transcends time and pace.

That is exactly what Justice Ruth Bader Ginsburg did with her life.

Justice Ruth Bader Ginsburg was a soft-spoken, quiet, short individual that continued to define and refine those first few words of our constitution, “We the people.”

She made it more inclusive ensuring that “We the people” includes all individuals living in the United States.

Justice Ruth Bader Ginsburg defined “We the people” at the N of 1.

*I specifically used ‘Justice’ to show respect. I find it interesting that in all of the articles celebrating her life and her fight for equality that many of them do not use the title as they would if speaking about a male Justice.